by Annie Kay and Vicki Polin
Examiner - Feb. 23, 2011
What happens in Brooklyn can easily occur in Chicago, Lakewood, NJ, Los Angeles and other insulated religious communities.

After learning of a several cases in Brooklyn,  The Awareness Center and the Coalition Against Legal Abuse have joined forces to insure that the Brooklyn Family Court system is safe for survivors of domestic violence, sex crimes and other types of abuses.

Yesterday, attorney Asher B. White, attempted to represent a man who's wife and children are alleged victims of domestic violence.  During the hearing, the alleged offender's ex-wife asked the judge if there might be a conflict of interest having Asher White represent her husband -- considering his wife (Henna White), is employed by the Brooklyn District attorney’s office -- as the liaison to victims in the Jewish orthodox community, and had past involvement in this case.
Both the Coalition Against Legal Abuse (CALA NY) and The Awareness Center also raised some concern regarding Asher White's affiliation with Ohel Family Services, since the survivor is also former resident of OHEL’s domestic violence shelter.
Back on Feb. 15th, CALA held a rally in front of Agudas Yisroel Bais Binyomin Hall, where Henna White was being honored.
During the CALA rally, members openly shared their belief that Ms. White was gathering information from those turning to her offices for help -- leading the alleged victims to believe that she was a victims advocate, and providing them with information and referrals. 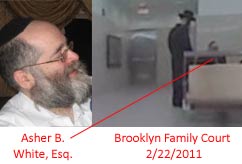 Several women at the CALA rally voiced their concerned that instead of using the confidential information to help those who made allegations of domestic violence and sex crimes, Ms. White shared confidential information with her husband, Asher B. White.
CALA members went on to say that they believe that the information obtained was then provided to Asher White and was used to help the alleged offenders, while harming the cases of the alleged survivors of both domestic violence and sex crimes.
The Awareness Center and CALA NY believe there is a conflict of interest to have attorney, Asher White represent the husband of any person who is a survivor of crimes who has utilized the services of his wife, Henna White at the District Attorney’s office.
CALA NY urges those who suspect their cases have been compromised by Henna White or by Asher White, call:  347-292-8364 for support.
Key points:

thanks for this tips