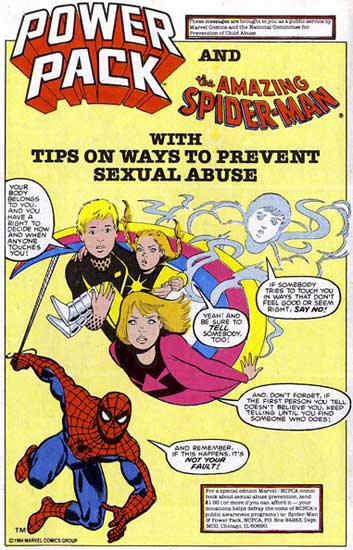 When Spider-Man revealed in a 1985 comic strip that he had been sexually abused as a youngster, the response was phenomenal,` according to the National Committee for Prevention of Child Abuse.

``We actually got hundreds of letters here addressed to Spider-Man saying, `You know what happened to you? It`s happening to me, said Anne Cohn, executive director of the committee.


Now the committee and Marvel Comics have produced another comic strip in which Spider-Man takes on the issue of emotional child abuse.

The four-page color supplement is included in today's Tribune and has already appeared in several other newspapers across the country, including the Houston Chronicle, the Des Moines Register and the Columbus Dispatch, said Christine Benuzzi, the committee`s director of resource development.
The committee has turned its focus to emotional abuse because ``it`s probably the most hidden and yet most insidious type of abuse,`` Cohn said.

A child may be told, `You`re disgusting. I wish you were never born.` If they`re told day after day that they`re worthless-that they`re never going to amount to anything-then sure enough, they don`t.

Children believe what their parents tell them.

Cohn said the committee has already seen responses to the ads and to the comic strip in areas where it has appeared. She said one woman-the mother of two boys-wrote that ``I first saw myself and my actions reflected on the TV in a short but painful commercial. I felt very ashamed of myself.

The 1985 Spider-Man comic, which dealt with sexual abuse, was produced after Pamela Rutt, Marvel Comics` publicity director, called the committee.

Spider-Man himself made appearances at schools, day-care centers and shopping malls in areas where the supplement was distributed, she said. When Spider-Man spoke of his frightening childhood experience, it was

When children came up and told Spider-Man that they also had the problem, ``Spider-Man would say, `I`m glad you came forward and told me that, "Rutt said. He would then refer the child to an expert for help, she said.

Spider-Man, (whose secret identity Rutt refused to reveal), is making similar stops for the new supplement, although there are no plans for a Chicago visit.

If copies in Sunday`s Tribune are included, about 4 million copies of the new supplement have been distributed, Rutt said. In the comic strip in today`s Tribune, Spider-Man discusses the problems of a boy and his sister, who are tormented by their cruel alcoholic father.