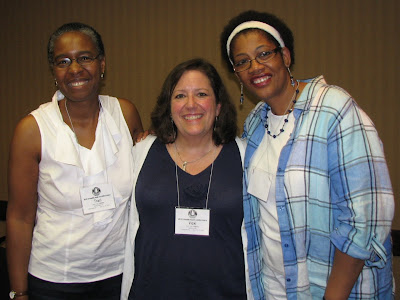 Being at the 2009 - NOW conference in Indianapolis was incredible. Because of my work in the Jewish world, it has been so long since I've been around so many like-minded people.

It was an honor to be on a panel with Rev. Dr. Traci West, (NAME REMOVED) and Maria Taylor. The three were amazing to listen to, along with those who were brave enough in the audience who shared their stories and experiences. Each and every person in attendance came from such completely different backgrounds, yet we were all describing the issues were basically the same.

It saddens me a great deal that we really cannot blindly trust those who are in leadership roles, especially when it comes to members clergy.

The reality is that trust is something that needs to be earned and re-evaluated as time goes by. Unfortunately, there are too many individuals who are giving over their own power to those who are more then willing to abuse their leadership positions for their own personal gain. No matter what faith, race and or social/economical background one comes from the issues and ramifications are very much the same. The only way to end clergy sexual abuse and any other type of sex crimes is by all survivors and those who care about them uniting together.

In the Jewish community when we speak out about sex crimes we fear anti-semitism if when we report sex crimes. In the African American community they fear an increase of stereotyping and racism. Other faiths they come up with similar issues in hopes of silencing, shaming and blaming those who have been sexually victimized. In all communities the survivors and their family members often become outcasts, and are often chased out of the community that at one time felt as if it was their home and family.

It never stops amazing me that no matter what faith and or ethnic group believes, the same exact problems arise when it comes to dealing with clergy sexual abuse. The words used, the names of the offenders and those who cover up the crimes may be different, yet it all boils down to the same thing -- the abuse of power and control.

It's strange how learning that Rev. Dr. Martin Luther King was known for manipulating women into having sexual contact with him, put me in a state of shock. I also briefly went into a state of denial. How could this American hero also be an alleged sex offender? But then again he's no different then any other member of the clergy who uses their role and position of power to use their own grooming process to lure in their next victim. King is no different then Rabbis Mordecai Magencey, Marc Gafni, Mordecai Tendler, Steven Kaplan, Yaakov Menken, David Kedmi, Hershy Worch, Tobias Gabriel, or many of the other member of the clergy who lured in adults. I personally believe they all should be "Defrocked" and criminally charged. The problem is that with most cases is that it takes those who have been sexually victimized years to come forward. Long past the time the statutes of limitations have run out. I personally feel the notion of statutes of limitations on all sex crimes (against adults and children) need to be abolished.

I also wanted to mention that on my way to the NOW conference I was listening to Carole King's Tapestry CD, with a friend. It's been years since either of us have ever heard it. When the song Smackwater Jack came on, my friend and I looked at each other in shock. We both heard the song millions of times, yet being adults who advocate for survivors the words seem to take on a different meaning. We both started wondering if the lyrics really were talking about clergy sexual abuse. In the past I had always thought of "Smackwater Jack" as being a civil rights song -- bringing an awareness about racism. Yet this time driving to the NOW conference to discuss clergy sexual abuse, it seemed to be talking about clergy sexual abuse, a topic which wasn't discussed back in the early 1970's when the song was written.

Below are the lyrics and also a link to Carole singing it on YouTube.

Hershy Worsh and wife have moved to Los Angeles.

Someone should let Luke Ford know.

PART 1 OF 2
-----------
Most of his sinful life the mobster Yitzchok Feuereisen has been spying on innocent Jewish children fishing out for future blackmailing their and their families harmful personal information for the managing hucksters of Ner Israel Rabbinical College. Yet when I read this past February about a Jewish World Review reporter "Robert Feuereisen" who was detained by the Secret Service for climbing over the media cordon in a frantic attempt to get Obama's autograph I foolishly couldn't even dream up that he and Ner Israel scamp "Yitzchok Feuereisen" were one and the same. I kid you not: recently I had to be at Ner Israel once again and verified this thing!!!

All of us who were at Ner Israel in Baltimore in the 70s knew a sneaky sycophant Yitzchok (Yitzchak) Feuereisen: an "alter bocher" running a "shabbos table" for yeshiva kids. Of course with a "blessing" of the Ner management. Feuereisen then moved in with his spinster sister in NYC but was making a buck as a proprietor of a bus service to Baltimore where he spent weekends. On my visits to Ner Israel after I got married I again always saw that man and his giant "shabbos table" with dozens of high school kids sitting around it. Ner Israel management never raised a finger against this obvious intrusion into THEIR right to coach THEIR kids. Guess why.....

We then knew little of the cover-ups at Ner though we knew that some rebbeim and many guys at the office were not so ehrlich but that's a different story. There were sickening whispers that Feuereisen had orgies with the high school children (Yitzchok Feuereisen was a perpetual "alter bocher" who had his own room in the packed Ner Israel high school dorm where he lived for years up until he was in his 40s!) and we heard that he was in bed with the compulsive liar and pedophile rabbi Moshe Eisemann and also a secret spy of the Ner mesivta principal rabbi Joseph "Yossi" Tendler & Associates and other stuff, but at that time that was weird and unbelievable at least to me.

PART 2 OF 2
-----------
Thereabout in the 90s the "alter bocher" Yitzchok Feuereisen at last married a shady Australian woman but continued (and continues now!) with his shabbos-spying&grooming-table: this time both at yeshiva and his newly built lavish mansion located one minute walking distance from the yeshiva dorm. This White House jumping incident first made me think what the hell else we could be expecting from a philanderer who was never able to hold his dick in his pants, who spied on kids wholly screwing their innocent lives and families with his falsified dossiers, who never kept shabbos while hiding behind his "shabbos table": to uncivilly chase after President Obama to fetch his autograph!

Yet I spoke about this stuff with my good buddy who has worked for the military for the past 20 years and knows Feuereisen too. This is what I heard: "Yitzchok (Feuereisen) has always been a bozo racist and sexist. Of course he came up to Mr. President whose skin color he absolutely loathes just because he wanted Obama to remember him and so have a trouble-free access to him or his team in the future. In matter of fact "journalism" is just a cover for Feuereisen: like the "vending machines" he has to let others see that his riches don't appear out of thin air. And yes he is spying: maybe for NIRC, maybe for some intelligence agency, or maybe even for himself: big-time trading of the White House insider secrets to the Mafia or fat cats of Big Business."

NOBODY DARES TO SAY IT SO I WILL: IF YOU STILL HAVE A CHILD AT NER ISRAEL TELL HIM TO STAY AWAY FROM THE DANGEROUS PHONY RABBI YITZCHOK ROBERT FEUEREISEN AND HIS "FREE" COKE AND CAKE: UNLESS YOU WANT TO FIND OUT FOR YOURSELF WHAT IN REALITY THE WORD "FREE" MEANS AT NER ISRAEL!!!