David Silverman along with two friends (who are both fugitives in Israel) used MySpace to lure in three teenage girls to a nightclub near Javits Center in March, 2007.

During the time of the assaults, Silverman was considered to be OTD (Off The Derech).  He had shaved his head, pierced his ears multiple times and had tattooed his body.

There are several individuals who go by the name of David Silverman. The individual discussed on this page was born on June 12, 1985. 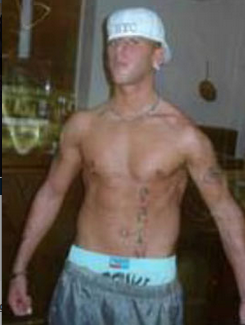 A Hasidic Jew indicted on shocking kiddie-porn and child-rape charges claims he’s too religious to even look at the grotesque photographic evidence against him.

The 23-year-old Rockland County man is due in a Manhattan court today to seek bail. If convicted, he could go to jail for as many years as he’s lived.

“The worst part is, we have no idea if these pictures – and there’s video, too – are still out there,” one source said

Raised in a Hasidic family upstate, Silverman left home in his teens, shaved his hair, tattooed his body, pierced both ears multiple times, and joined the sex- and drug-drenched rave and trance music scene.

The girls knew him only as David or his online names, “DJ Rings” and “King Dingling.” By the time cops found him, his two friends had fled the country, the illegal “dance club” on 34th Street had been dismantled, and his computer’s hard drive was wiped clean.

Or so Silverman thought.

Silverman has insisted he never touched the girls.

On the strength of the new evidence, Silverman, who had returned to the Hasidic lifestyle and moved to Spring Valley, was tossed into jail in lieu of $50,000 bail on charges of child pornography and statutory rape.

NEW YORK, N.Y. (WPIX) -- A Hasidic Jew who is facing child rape and pornography charges, claims his religion prevents him from looking at the shocking evidence filed against him.

But according to prosecutors, during jury selection last month a series of triple-X photos clearly implicating Silverman and his two accomplices in the crime, surfaced.

Silverman, who had left his Rockland County home while still a teenager, recently returned to a Hasidic lifestyle. He is refusing to discuss anything to do with the charges and says his religion prevents him from looking at the pornographic evidence.

NEW YORK - A Spring Valley man accused of having sex with underage girls claims his religious beliefs prevent him from viewing sexual photographs and helping his own defense.

David Silverman, 21 at the time, is accused of having sex with three Westchester girls during a day of debauchery in Manhattan in March 2007, authorities said.

He returns to Supreme Court in Manhattan today for a bail hearing before Justice Bruce Allen.

Silverman is accused of not only having sex with the girls, but also taking photographs of them having sex with other men, according to the Manhattan District Attorney's Office.

But because he later returned to being an ultra-religious Hasidic Jew, Silverman won't look at the photos, his lawyer, Israel Fried, said yesterday. Fried said Silverman's refusal to participate makes defending him more difficult.

"He's clearly become more religious since this case has been initiated," Fried said. "His religious practices prohibit him from viewing certain images that would be immodest."

Silverman was being evaluated by professionals to "figure out if this is strictly a religious belief or a mental defect," Fried said. :D

Silverman grew up Hasidic but left the community in his teen years and entered the foster-care system, Fried said.

Fried said he is a former prosecutor and that he had met Silverman while doing community outreach with young people.

A grand jury indictment accuses Silverman of having sexual intercourse and oral sex and of committing other sex acts with three girls - two 15-year-olds and a 14-year-old.

Silverman and another man are accused of picking up the girls on March 23, 2007, in Westchester and driving them to a building near the Javits Convention Center on 34th Street.

A third man joined them, and they are accused of getting the girls drunk on alcohol.

Silverman and the other men were accused of having sex with each girl, with digital photos being taken, Kushner said.

Fried said that while the law is clear that sex with minors is illegal, the girls were less than forthright with Silverman about their ages. Fried also said the girls' MySpace page was suggestive and salacious.

Silverman has pleaded not guilty to the charges, denying he touched the girls. Attempts at a trial have been aborted twice during jury selection.

Nine jurors were selected as of Jan. 26, when prosecutors told the judge that incriminating photos had been found. As a result, both sides agreed to release the jurors and start again, Kushner said.

Shrinks aren’t buying a 23-year-old Hasid’s claim that he can’t assist in his defense against charges of rape and child pornography because he’s too devout to look at the photographic evidence.

Defense lawyer Israel Fried admitted that a plea may be the best course to avoid more prison time.
“A lawyer I am,” he said. “A magician I am not.”


A 23-year-old Hasidic Jew who’d insisted he was too devout to deal with rape and child-porn charges against him pleaded guilty yesterday to seducing three Westchester girls ages 14 and 15.

David Silverman, of Rockland County, will be sentenced next month to one to four years for rape, sodomy and child endangerment.

The victims had met him online via MySpace in 2007.

Raised in an ultra-Orthodox community, Silverman had by then moved away, tattooed his body, shaved his head and pierced both ears.

By the time he was indicted a half-year later, Silverman had returned to Hasidism, and insisted he’d never had sex with the girls. 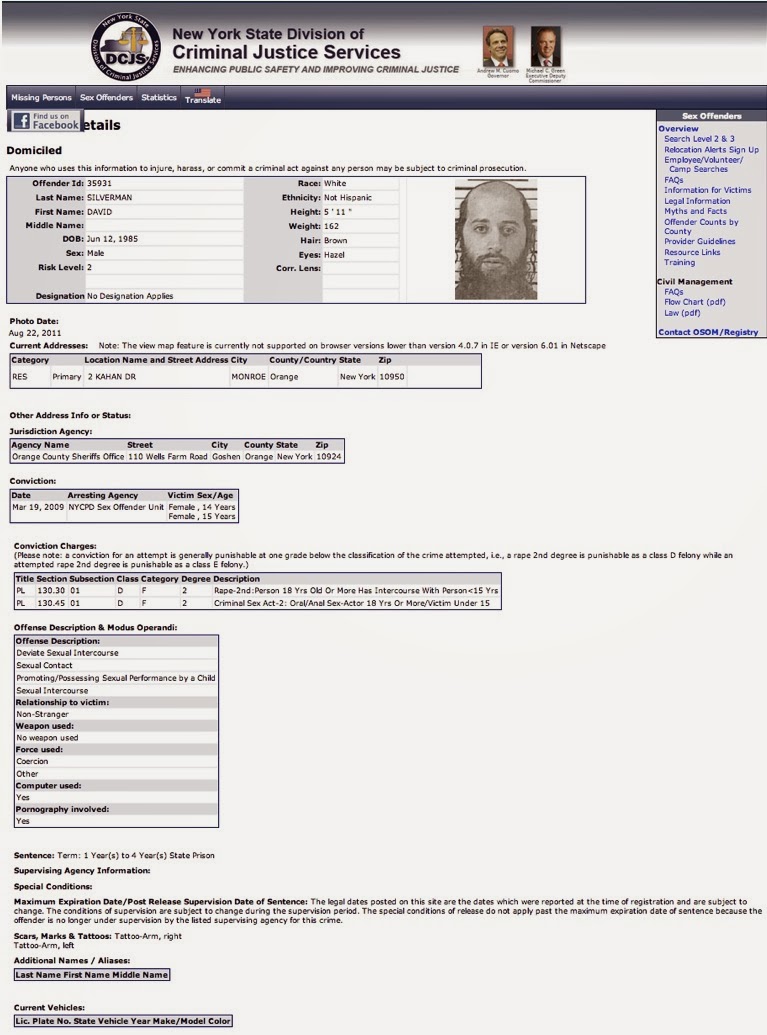