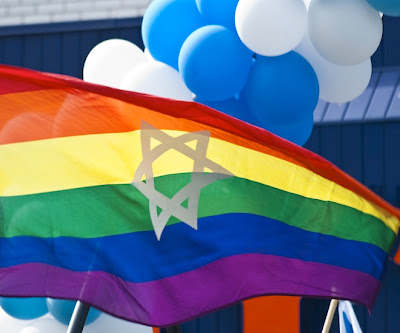 Sexual Molestation: 61% of the suicide attempters had been sexually abused (vs. only 29% of the non-attempters). - Gay Teens and Attempted Suicide

The Awareness Center is dedicated to addressing the needs of all Jewish people, including those of the Jewish faith who are gay/lesbian and are Survivors of childhood sexual abuse. Please note, except for the area of sexual abuse and recovery, The Awareness Center does not make judgments concerning individuals, groups or organizations. Our view is that - as with any Jewish survivors - survivors who are gay/lesbian need to know that they are NOT alone, and that they can and are worthy of receiving effective help.

Gay Teens and Attempted Suicide
By Dale O'Leary
Self-identified gay teenagers are at greater risk than straight teenagers to attempt suicide. Gay activists say this problem is due to social homophobia, and that it will be remedied when society puts its stamp of approval on homosexuality.
Activists have grossly exaggerated the number of gay teenagers who have actually died by suicide (1). Nevertheless there is substantial evidence that such teenagers are at greater risk to attempt suicide, and thus it is important to examine the possible contributing factors.
Researchers Remafedi, Farrow, and Deisher (2) compared gay and bisexual adolescents who had attempted suicide, to a group of those who had not. The two groups totaled 137 males, aged 14 to 21. Of that number, 41 (30%) had made at least one suicide attempt.
From this study we see that gay teens that attempt suicide tend to be involved to an alarming degree in drug use, early sexual activity, and prostitution--activities which also predominate in the histories of straight teens who attempt suicide.
The researchers say that suicide attempts appear to be related to "'coming out' at a younger age, gender atypicality, low self-esteem, substance abuse, running away, involvement in prostitution, and other psychosocial morbidities." In 44% of cases, subjects attributed the suicide attempts to "'family problems,' including conflict with family members and parents' marital discord, divorce, or alcoholism."
In fact, psychology has long known that homosexuality is associated with dysfunctional family structures. Statistically, gay men tend to report poor childhood relationships with their fathers, while lesbian women tend to report poor childhood relationships with their mothers (Bell, Weinberg and Hammersmith). Thus "society's oppression" seems a simplistic and misleading explanation for suicidal ideation in gay teenagers.
Among the Remafedi study's findings:
Early Self-Identification as Gay: Subjects who had viewed themselves as homosexual or bisexual at an earlier age were more likely to attempt suicide.
Early Sexual Activity: Teens who had attempted suicide were more likely to have had sexual experiences at an early age.
Effeminate Gay Males are Most at Risk
Homosexually-oriented adolescents classified as "feminine" are at the highest risk for suicide attempts, drug abuse, prostitution, arrest, and, by implication, the deadly health problems associated with unprotected anal sex. The earlier these teens self-identify as homosexual, and the more "out" they are, the greater the risk of negative lifestyle factors, according to the study.
Why is Treatment Not Recommended?
The tragedy is that there is a treatment for effeminate boys, starting at toddler age, who suffer from Gender Identity Disorder of Childhood -- that is, males who report the persistent wish to be a female. Boys who learn to be happy about being boys are far less likely to suffer the scapegoating and peer rejection that isolates them from contact with their own gender and thus prevents normal male bonding experiences.
Most prehomosexual boys are not explicitly effeminate, but nonetheless are experiencing gender-identity conflict, same-sex peer isolation, and a sense of alienation from their fathers. The same is true for girls who are suffering from gender-identity conflict. Treatment is available for these children, but instead psychotherapists often use the politically correct approach to "accept oneself as gay" rather than addressing the root problem of gender alienation.
Parents concerned about prehomosexuality in their children are often told by their pediatricians not to worry, that no treatment is available, and that the child is genetically destined to be homosexual--even though research scientists know that homosexuality is likely due to a combination of temperamental characteristics such as sensitivity or risk avoidance, environmental influences, and learned behavior patterns, and is not simply "inborn" and predetermined like eye color.
The Problem of Sexual Abuse
When an adolescent self-identifies as gay or bisexual, health-care professionals should ask, "Was this child sexually abused?" The Remafedi study reveals that 61% of self-identified gay teens who had attempted suicide had a history of sexual abuse. Sometimes a boy may not recognize an early sexual experience as abuse, but instead see it as confirmation that he is homosexual. Even adults may fail to see the incident as abuse when the abuser is another same-sexed child or adolescent. An experience of same-sex sex often establishes a lifelong sexual habit pattern in a child who is starved for same-sex attention, affection and affirmation.
The gay lobby has demanded that boys with GID be labeled as prehomosexual, and that schools and psychotherapists counsel their parents to accept the condition as normal, desirable, and unchangeable. Parents, however, have a right to know the truth, and to have access to treatment.
Today, schools issue dire warnings on the (comparatively miniscule) dangers of smoking, and tobacco companies have become liable in some cases for damages. Someday, perhaps, parents who have watched a son die of AIDS will decide to sue their pediatrician because when they brought the child for treatment for GID, they were told not to worry, or that nothing could be done. Perhaps the parents of another boy will bring suit against a school system which labeled the child as unchangeably homosexual and turned him over to a gay support group, where he contracted AIDS.
In both cases, proper diagnosis and treatment might have prevented a negative outcome.
References
____________________________________________________________________________________

FAIR USE NOTICE
Some of the information on The Awareness Center's web pages may contain copyrighted material the use of which has not always been specifically authorized by the copyright owner. We are making such material available in our efforts to advance understanding of environmental, political, human rights, economic, democracy, scientific, and social justice issues, etc.
We believe this constitutes a 'fair use' of any such copyrighted material as provided for in section 107 of the US Copyright Law. In accordance with Title 17 U.S.C. Section 107, the material on this site is distributed without profit to those who have expressed a prior interest in receiving the included information for research and educational purposes.
For more information go to: http://www.law.cornell.edu/us code/17/107.shtml . If you wish to use copyrighted material from this update for purposes of your own that go beyond 'fair use', you must obtain permission from the copyright owner.